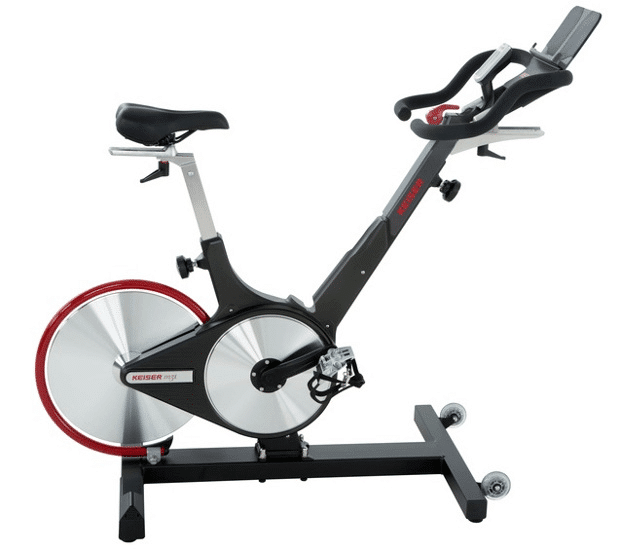 So you own a Keiser M3I bike and have big plans for it. Part of the plans you might have is checking whether it is compatible with various hardware that you might want to install, such as the Zwift. However, does it allow you to do so? Read on to find out.

What is the Keiser M3I bike?

Among the bikes that you notice in indoor cycling, the Keiser M3I is among the groundbreaking ones as it features several advantages that other models lack, such as the M3 and M3 Plus. These include:

You are able to use it quietly without much disturbance due to its use of the belt drive mechanism, which also increases its smoothness and efficiency.

The belt mechanism works by transferring the cycling power from the smaller pulleys to the larger one, which makes the flywheel start turning. This eventually results in a high-gear ration that gives it a similar feel to an actual road bike.

If you want to track your progress, consoles are very important in the job – and the M3I has both a light sensor and a digital display. However, the display is not in a touch-screen form, so you have to power it by pedaling instead of relying on pressing some buttons to check your progress.

There are 24 resistance levels in the system, which caters to multiple cycling intensities – ranging from light, to medium and intense. Most bikes will have 20 levels at most, so the M3I beats out many similar bikes for its price range.

The resistance will mainly use a system of Eddy currents, which also means that the flywheel will not come into contact with the other parts. Instead, the system uses two magnets on both sides of the flywheel to control the resistance levels, and they will not be vulnerable to wearing out (unlike the brake pads and friction pad that can generate plenty of noise when they wear down).

The display screen will also show you the current gear you are using. There is also a shaft at the lower part of the handlebars that you can use to adjust your seat – in contrast to the tension knob that is in many models and does not indicate where your optimal seat position is. If you want to use the emergency brakes, it is also possible because the screen will display the gear levels – just move the shaft upwards and hold it in place to make the flywheel stop turning.

It is quite easy to keep this model in working order as its strong frame (entirely steel) allows you to use it in a variety of environments. The dimensions also remain steady and durable, while the shape of the frame prevents sweat accumulation. Overall this is a great bike for beginners and advanced users alike.

If you are searching for a way that makes your indoor cycling sessions more interesting, then Zwift is among the top contenders and has numerous people singing its praises. If you have no idea what it is, it is a turbo trainer game that you can use to link to other cyclists in a virtual setting, through the turbo linking of your iPad, computer, Apple TV or iPhone. This eventually reduces the boredom that you might experience when you are indoor cycling alone.

In addition to competing against additional cyclists in Zwift races, you can also access specific workout programs, which are all designed from the ideas of professional coaches. You can then complete these programs in a group, and get the same intensity of training as other riders.

All of these features make the game better than outdoor riding, at least according to the company. The reasoning behind it is that external factors such as traffic, other cyclists and time constraints can take the fun out of riding outdoors, and this might be true for you, so you might prefer doing your exercise in an indoor environment.

An interesting feature that comes with the game is that you can choose your location from a range of virtual worlds, such as London, New York and Watopia. You can also access the route maps that cover various rides on the Strava part of the game, as well as the leaderboard scores to make it more interesting.

Is the game free?

It is not, as you pay close to $15 every month, but the advantage here is that you can cancel your subscription at any time. You neither need to commit immediately since there is a free trial lasting 7 days and is available to new members.

In order to use it optimally, you require a turbo trainer – especially a smart one if you prefer the idea of doing immersive gameplay. The trainer will have a design that takes on a direct drive appearance, along with variable resistance and a power meter. The turbo then measures your power output, and then Zwift receives this data in order to power up your avatar.

If you do not have a smart turbo trainer though, you can also use any older turbo trainer – as long as you combine it with a Bluetooth speed sensor or ANT+. Combine this with an ANT+ dongle, a small stick that you connect to your computer through USB, which then communicates with the system.

If you are using a computer to power the system, then you can use the iPad, Windows, Apple TV, or iOS.

Can both of them work?

While the Zwift and Keiser M3I are great in their own separate ways, they unfortunately are not compatible with each other. The M3I relies on a Bluetooth mechanism, which allows you to connect your devices using this method, but it does not have a specific slot in its frame to handle the Zwift dongle or the software associated with it. There are other models that can do the same, as the Zwift website has a list of compatible models.

Hi, my name is Marjorie, a health and fitness expert.
Sports and fitness have always been my area of expertise since I could remember. For me, one of the greatest things I accomplished is opening my own gym as well as starting this blog on indoor bikes and fitness. Indoor bikes have brought a massive break for me and my clients, they have enabled me to look past some of my client’s many challenges during work out and achieve the best results they can. I would say that I am proud to help people understand the benefits that come with indoor bikes when it comes to fitness and health and how to find the best one for the cause.

Indoorbikeexpert.com is a participant in the Amazon Services LLC Associates Program, an affiliate advertising program designed to provide a means for sites to earn advertising fees by advertising and linking to Amazon.com. Additionally, indoorbikeexpert.com
participates in various other affiliate programs, and we sometimes get a commission through purchases made through our links.